Do Plants Other Than Cannabis Contain Cannabinoids? 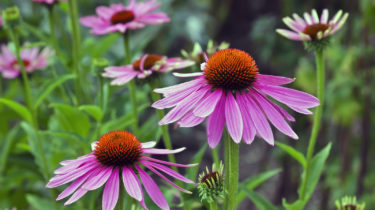 Do plants other than cannabis contain cannabinoids? When it comes to cannabinoids, it’s typically cannabis that gets all the attention. Both hemp and marijuana are packed full of cannabinoids (the healing compounds in cannabis), the most famous being THC and CBD.

Were you aware, however, that there are actually several other species of plants that also contain cannabinoids of their own?

9 Plants Other Than Cannabis That Contain Cannabinoids

Ever taken Echinacea during cold or flu season? Echinacea is one of the most widely-used medicinal plants that exists and is commonly used to help with symptoms of the common cold and fatigue.

Echinacea is so effective because it contains cannabimimetics that interact with the endocannabinoid system. Echinacea stimulates the CB2 receptors that help to regulate immune function and fight inflammation.

Cacao is a well-known superfood, and Theobroma cacao literally translates into “food of the gods.” We all know that chocolate makes us feel better, but have you ever stopped to wonder why? For one, cacao contains several “feel good” chemicals.

Aside from phenylethylamine, tryptophan and theobromine, cacao contains anandamide, also known as the “bliss molecule.” Anandamide is an endocannabinoid and neurotransmitter produced in the brain that binds to THC receptors and creates a sense of euphoria. In fact, cannabis and cacao are two of three plants that contain particular compounds that connect to particular brain receptors like a “lock and key.” While chocolate doesn’t contain any psychoactive effects and certainly won’t make you “high” like marijuana, it does offer a sense of wellbeing and euphoria and has a beneficial effect on the body and brain.

Helichrysum is a daisy native to South Africa that contains a very similar chemical compound to the cannabinoid CBG (cannabigerol). While CBG does not contain any psychoactive effects, it is the “parent” cannabinoid to both THC and CBD. Studies have shown that CBG is effective in decreasing inflammation, contains neuroprotective properties and contains antidepressant effects.

The electric daisy is native to the Amazon and is revered for its ability to fight tooth pain. Clinical trials have shown that a gel made from the electric daisy blocks nerve endings, offering natural relief for toothaches. This is all possible because the electric daisy contains cannabimimetics known as N-isobutylamides that stimulate CB2 receptors in the endocannabinoid system.

Liverwort is a plant native to New Zealand and has been used to alleviate symptoms associated with bronchitis, as well as liver, gallbladder and bladder issues. How exactly does it work?

Liverwort contains perrottentinenic acid, a cannabimimetric that works very similar to THC by interacting with the CB1 receptors in the endocannabinoid system. Unlike THC, however, liverwort doesn’t contain psychoactive properties and won’t get you high.

Here’s something you might not know about black pepper — it has a lot in common with cannabis. Strange, but true. It not only interacts with CB2 receptors but also contains high levels of the terpene beta-caryophyllene, which is famous in the cannabis world for giving certain marijuana strains their distinct peppery aroma.

Black pepper also works with the endocannabinoid system due to the presence of the alkaloid guanosine, which has shown to potently inhibit the cellular reuptake of anandamide and 2-arachidonoylglycerol, thusly increasing the activity of these two endocannabinoids. Black pepper has shown to be effective as an anti-inflammatory that can help alleviate pain associated with arthritis and osteoporosis.

Kava, native to the Pacific Islands, has been used for thousands of years and is still consumed before the beginning of important religious or ritualistic ceremonies. In the West, kava has become popular for its anti-anxiety and relaxing effects. If you’ve consumed kava, you may have noticed that it contains effects that are similar to cannabis.

This is due to the presence of compounds within the plant known as kavalactones. Yangonin, one of these kavalactones present in kava, has shown to directly interact with the CB1 receptor. Kavalactones also bind to areas of the brain associated with substance abuse, addiction and cravings, and people living in the Pacific Islands where kava is native have used it for years as a treatment for addiction.

Black truffles, which have existed for 156 million years, are similar to cacao and cannabis in that they create anandamide. As mentioned when talking about cacao, when consumed, they release anandamide into the body where it then binds with the CB1 receptor, which can help alleviate pain and increase feelings of wellbeing.

Rhododendron essential oils have been used as an integral part of Chinese medicine for years. Research shows rhododendron to be effective in eradicating everything from staph infections to cancer cells.

A 2011 study found rhododendron contains cannabinoid-like compounds known as anthopogocyclolic acid and anothopopochromenic acid, as well as five related compounds that are known as synthetic analogues of cannabinoids CBC, CBL and CBT and act very similar to these compounds found in cannabis.

Cannabis: One of Many Plants that Contain Cannabinoids

Do you have further questions about plants other than cannabis that might contain cannabinoids? Connect with us!

Our CBD tincture oil is as pure as they come and versatile, our CBD  tincture liquids can be used to create topical pain relief creams or taken orally. Finished with an eye dropper, which makes the fluids easier to administer. Dispense a few drops in your morning smoothies, oatmeal or baked goods. You will feel that carefree relaxation that these CBD tincture liquids deliver.

At JustCBD, We firmly believe that purer is better, which is why all of our oils and concentrates are manufactured in their purest form. Produced in the USA using nothing but the finest quality ingredients, our CBD oils are all proven to be as potent as possible. By being honest about what goes into our extracts, we hope to gain your trust. Our team is fully committed to providing you with premium grade cannabis goods for both recreational and medicinal purposes.

Shop our selections to discover the world of gourmet CBD, edibles, doobie rolls, CBD concentrates and flavored terpenes. Whatever it is you crave, you’re bound to find it here at JustCBD.