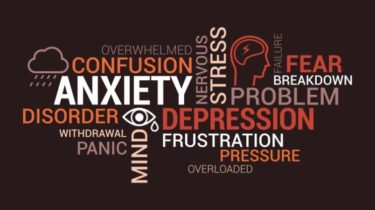 Out of all mental illnesses that exist in the U.S., which one is the most common? If you guessed anxiety disorders, you’re right! Anxiety disorders are the most common mental illness in America, which impacts 40 million adults aged eighteen and above. In other words, 18.1 percent of the country’s population is impacted by some type of anxiety disorder annually. Although different anti-anxiety treatment options are available, many of them cause adverse side effects. This is one reason why more people are transitioning to Cannabidiol (CBD) usage to help symptoms of their anxiety. This cannabinoid contains various medicinal and therapeutic benefits including the fact that CBD can help anxiety.

We already know that 40 million adults are affected by different anxiety disorders. Before discussing what anxiety is and its symptoms though, there’s something important to understand. Millions of people suffer from anxiety, but different forms of it can impact individuals in multiple ways. Overall, anxiety is categorized as a series of emotions and experiences that range from daily worries and fears. This can be caused by life’s challenges and hurdles, which can trigger overwhelming feelings and situations.

Generally, responses to anxiety are hardwired into our body’s neurons. These anxious responses discover various outlets that can trigger different outbursts and/or anxiety attacks. Many of these responses and/or triggered situations can spill into an anxiety disorder. Anxiety disorders can even result in panic attacks, flare up PTSD symptoms, and produce obsessive-compulsive behavior. Numerous people can also experience generalized anxiety, social anxiety, and chronic stress. Although several anti-anxiety treatment options are available such as different pharmaceutical drugs, it has been discovered that CBD can help anxiety.

The Progression of CBD Usage for Anxiety

Over time, CBD has become more well-known for its non-psychoactive effects, vast array of medicinal and therapeutic benefits, and safety profile. Unlike other cannabinoids like THC, CBD is non-impairing, and it can even relieve anxiety caused by THC. For multiple decades though, CBD has attracted much interest regarding its impact on the body’s central nervous system. There are numerous medical conditions, diseases, and illnesses that CBD can help. A few examples include epilepsy and seizure disorders, Multiple Sclerosis, neurological disorders, neuropathic pain, PTSD, and more.

In recent years, different forms of evidence have been released that indicate CBD’s ability to help treat multiple neuropsychiatric disorders due to trauma, depression, and anxiety. Thus far, various studies on anxiety have been performed mostly on animals, but a few have focused on humans.

In addition, over time, a handful of studies have been conducted on how CBD can help anxiety and different anxiety disorders. In particular, one study found that CBD can produce anxiolytic or anti-anxiety effects. Why’s this the case though? It mostly has to do with CBD modulating the same systems in the brain as various anti-anxiety pharmaceutical medications do. So far though, current anxiety treatments help boost serotonin levels within the brain. This is done by preventing the brain’s ability to reabsorb serotonin. As a result, this helps improve one’s mood. However, current anxiety treatments can also stimulate the brain in a way so that it creates new neurons within the hippocampus.

On the same note, a 2013 study published in Current Neuropharmacology showed a link between CBD and neurogenesis. It turns out that neurogenesis has demonstrated its ability to lessen anxiety and depression. Additionally, a 2016 animal study demonstrated CBD’s ability to create a rapidly-acting anti-depressant and anti-anxiety impact. This is done via the stimulation of serotonin transmission within the brain.

At this point though, preclinical evidence overwhelmingly shows CBD’s effectiveness in lessening anxiety behaviors due to various disorders. These disorders include PTSD, generalized anxiety disorder, panic disorder, obsessive-compulsive-disorder, and social anxiety disorder. Additionally, it has been discovered that various cannabinoids, especially CBD can modulate emotional responses. According to another recent study, clinical evidence suggests that acute consumption of low CBD doses results in anxiolytic effects.

However, it doesn’t stop here. For example, other research findings consist of CBD’s ability to exert intrinsic anxiolytic effects in both rodent subjects and in patients with social phobia. Also, CBD has been found to lessen amygdalar responses to fearful stimuli. This could be helpful for the anxiolytic effects of CBD in the treatment of social phobia.

Additional Research Findings on How CBD Can Help Anxiety

Currently, the evidence that supports CBD’s anti-anxiety effects is derived from animal research and extremely small yet short-term human studies. In both animal and human studies though, it’s indicated that CBD contains anti-inflammatory and anti-anxiety properties. Then, back in 2011, one study found some interesting findings. Specifically, out of a few dozen human participants, some had social anxiety disorder and were asked to talk in front of a big audience. Researchers gave some participants CBD and the others received a placebo.

From here, anxiety levels were measured amongst the individuals who did and didn’t take CBD. It was found that the individuals who consumed CBD reported substantially less anxiety as compared to those who didn’t consume CBD. Aside from these findings, CBD has been recognized for its incredible safety profile and minor sedative effects. This cannabinoid is also non-addictive, users cannot overdose from it, and it’s a safe and natural alternative to pharmaceuticals. Even though CBD can help anxiety and different anxiety disorders, additional trials and studies are in the works to uncover more data.

Future Studies and Clinical Trials on CBD and Anxiety

Moving forward, numerous researchers are interested in conducting more studies and trials on the topic of CBD treating anxiety and various anxiety disorders. For instance, one clinical trial will start this November. It’ll aim to find out, CBD can help people with PTSD and/or those who have severe alcohol use disorder. Another clinical trial will take place shortly to test the effectiveness and side effects of CBD in the prevention of opioid relapses by opioid abusers. From here, the researchers will see whether CBD reduces cravings for opioids or not. Overall, as time goes on, more discoveries will surface regarding additional links to CBD as an anti-anxiety treatment method.

Even though there are various forms of anxiety and anxiety disorders, CBD can be of use to those struggling with these issues. Since millions of American adults are impacted by anxiety, it might help to incorporate Cannabidiol into a daily routine. Not only is this cannabinoid safe, natural, and non-addictive, CBD can help anxiety without adverse side effects. If you’re interested in consuming Cannabidiol, check out our line of quality CBD-based products.